DIY subwoofer - building plans and pics
Hi Lucio,
You wanted to know more about my subwoofer build. Purpose of my build was to hear full bodied sound in my room including the lower notes. My room is quite large and it's unfair for any stand-mount speaker to expect room filling sound.
I decided to build one rather than buy as I realized I would have to pay double the price for the performance and maybe my own built subwoofer would out perform those of equivalent price. Moreover, I read that a sealed subwoofer is not much of a trouble to build if one has the time and inclination.
Here are a few pics of my subwoofer build. A few details at a glance:

I calculated the volume of the sealed box using a free software (available on the internet) and went from there on basically on my own. I lucked out and it sounds very good and goes well with the Morel midbass driver on the Merlin TSM. I selected an Hypex plate amplifier - despite its cost - as I wanted good control over the driver. But I must say - the most important thing is the placement of the sub-woofer in the room. It took me couple of times moving it around to get it right and also some few friends to help me with the music and the sound.
Hope this helps your readers.
A sealed subwoofer is easier to build than a speaker and maybe some of your readers may want to try a similar build. It's fun and gives a good sense of satisfaction. And I suppose that's half the music itself.
Regards,
Mahesh - E-mail: mpwaran (at) yahoo.com 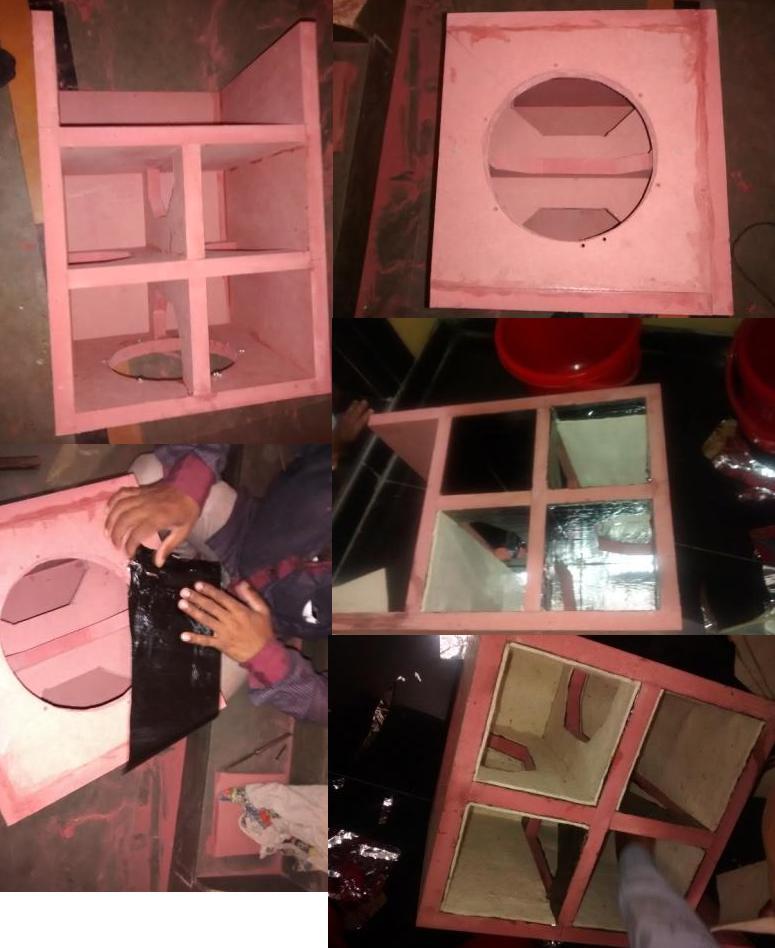 LC
Dear Makesh,
thanks for the update! Just one naive question: why is it PINK???? :-OOO Just to match the rear wall?
Lucio Cadeddu

Audiophile Linux
Good morning Nick. I read your review on Audiophile Linux published on Nov. 2013. I am thinking of implementing such program on one of my laptops. However, I am not sure if this program will run/work on a 32 bit machine. I contacted the "AP-Linux" website but I did not get a response. Do you know if this program will work on a 32 bit pc?
Thanks for your information.
Best Regards,
David - E-mail: ksdb010 (at) hotmail.com

NW
Hi David,
AP-Linux is 32-bit so you will be fine. The latest version is also reviewed on TNT-Audio.
Regards,
Nick Whetstone

LC
Dear Stefan,
that project has been stopped, sorry for that. At a first glance we seemed to be able to find a link between characteristic impedance of the cables and their sound quality but then we found several counterexamples, as there were digital cables that didn't have the right characteristic impedance (75 Ohm) and sounded apparently better than others that were closer to that desired standard. For this reason the results were not interesting from our point of view. In the meanwhile our editorial policy has changed and we've stopped reviewing cables of any kind.
Sorry for any inconvenience this may have caused :-)
Lucio Cadeddu

Remote balance control
Hi Nick,
Can you please advise me. What I need to do is ever so slightly attenuate (reduce volume) of my RHS speaker in my listening room. Currently it is closer to me and therefore too loud and overrides the LHS speaker. My modern DAC has only a single remote volume control and it does not have a left/right speaker balance control that I can resort to using either. So my idea is to attenuate the signal between the DAC and the power amplifier for the RHS speaker only. The attenuation level MUST BE adjustable and remotely controlled. I came across the following one of your reviews for parts for building a remote attenuator. It looks like the thing I am looking for. Do you have a better suggestion, preferably ready made even if it will cost a bit more?
My only other alternative is to re-arrange my listening room so that my seating position is equidistant to my speakers - something I'd rather not do :-)
Kind Regards,
John - E-mail: john (at) greenjnl.com.au 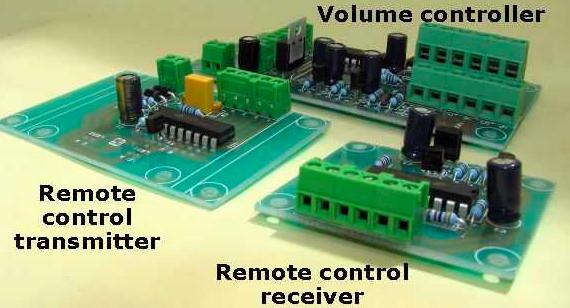 NW
Hi John,
The Paul Hynes volume control did have a channel adjuster to do exactly what you want, but I don't think he is still selling them. You could try emailing him to see if he has any old stock. paul (at) paulhynesdesign.com
Other than that, I do not know of an off-the-shelf device. I think that trying to attenuate one speaker using resistors would be so hit and miss as to be impractical. I don't need to do what you want to do as my room is set up symmetrically, but I could adjust the speaker balance using my Behringer DEQ 2496 (although not remotely). A DEQ 2496 would also give the you the ability to do room correction too.
Personally, I would recommend rearranging your room.
I hope this helps.
Nick Whetstone

DIY subwoofer
Dear Lucio,
Hope you are doing well. I've made a DIY Sealed 10 inch subwoofer with a Dayton RSS265 HF4 driver and Hypex DS 4.0 plate amp. I am able to hear the lower notes much better now - given the large size of my room. Here is a picture attached.
Regards,
Mahesh - E-mail: mpwaran (at) yahoo.com 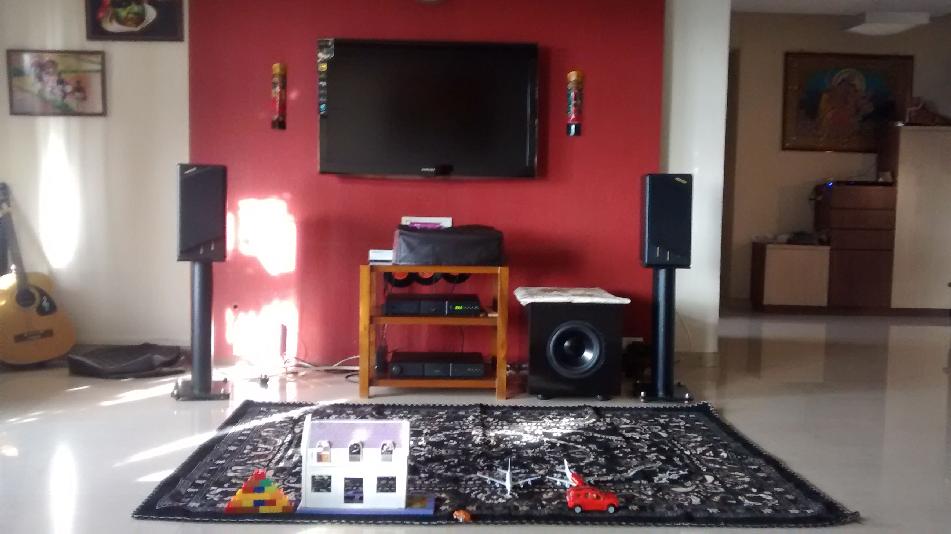 LC
Dear Makesh,
thanks for the update! Please let us know more about the design you chose for the enclosure, building plans etc. Just one advice: it should be better to move the subwoofer away from where you have installed it, because it is too close to the turntable and it may generate acoustic feedback when playing vinyl.
Keep us updated!
Lucio Cadeddu

Capacitors
Hello Mark,
I saw your commentary on crossover capacitors. May I ask a question ?
Someone is building a pair of loudspeakers for me. This builder has much experience. He likes Mundorf capacitors and is thus far is using the Mundorf EVO Silver/Gold/Oil capacitors.
I do not know anything about capacitors, do you have an opinion about the above capacitor?
From my brief research of capacitors, apparently every capacitor can have its own sound signature, thus can be extremely subjective to the listeners ears as any component in a system.
With kind regards,
Joseph - E-mail: juniperedge (at) gwi.net

MW
Hey Joe,
Thank you for your interest in my articles about capacitor sound. It is encouraging to know when readers find them useful.
Although I have not tested these capacitors in the crossover location of the audio chain, I can offer some general pointers.
Capacitors do indeed sound different and there are various basic engineering reasons for this. In the case of passive crossovers those reasons are due to the contexts of higher higher currents and hostile environments. These are among the many reasons why active crossovers are always a more satisfactory and cost effective solution than big amplifiers and expensive passive crossover components. If your Old Scribe was not a reviewer, there would never be a passive crossover in the music room.

If you are committed to installing passive crossovers, the quality of the inductors (or chokes) in series with the bass and/or midrange drive units, will have a profound effect on the sound quality. Air-cored inductors suffer from fewer dynamic problems, of lesser magnitude too, than ferrite or laminated-steel core inductors. Unfortunately they also require many more turns so their DC resistance is much higher. Hence air-cored inductors require winding with much heavier gauge wire than ferrite-core inductors. However, this also further reduces dynamic compression due to heating and I have found OFC (oxygen-free copper) litz-wired inductors to be good, but many others prefer flat wound inductors including those wound from exotic materials and Mundorf make these too.

It is essential to mount the crossovers outside the hostile environment of the loudspeaker cabinet. The inductor wire and the capacitor lead outs will all obey Fleming's right hand rule as they are jiggled about in the magnetic fields in the cabinet. The lack of airflow on the inside back surface of a loudspeaker soon prevents heat dissipation from the capacitor components and their values change as their temperatures rise too.

Capacitor choice is challenging as all the components are operating within a closed system with each other and with the drive-units and the driving amplifier. In crossovers, paper-in-oil types are often better self-dampening than the various plastic/polystyrene/polypropylene film types. All of the above are orders of magnitude better than the non-polar electrolytic capacitors usually fitted in commercial ready-made products. However, paper-in-oil capacitors can sound less clear than other premium types like Teflon/ptfe film dielectric. Audiophile paper-in-oil dielectric capacitor designs often mitigate this with silver foil and lead-out wires, which tend to be brighter sounding than copper (for whatever reason). Tin and gold are materials that have been far less predictable in my experience.

The Mundorf EVO series are noted for their low ESR (Equivalent Series Resistance) which is important to make sure passive crossover circuits behave as designed (for similar reasons as getting the best inductors) at all signal levels. The Mundorf EVO are designed to be in the range beneath the 'Supreme' range, which makes them better value for passive crossovers. The 'Supreme' capacitors are basically back-to-back series EVO caps with all the benefits of differential circuits or humbucker guitar pickups. The stunning Canor TP306 VR+ phono stage and Canor TP106 VR+ integrated amplifier earned the "+" part of their VR+ status by their inclusion of Mundorf MCap ZN zinc foil capacitors below the basic EVO types in the Mundorf range, which in turn sit below the EVO Oil dielectric types. That was a very positive, if different context, experience of a different capacitor lower in the same range. Hence, the Mundorf EVO Silver/Gold/Oil capacitors should be as good as it gets in a passive crossover. and kep you going until you take the plunge and go active!
Happy listening,
Mark, The Old Scribe