I've just read about VTA
Hi My friend, well I have put your emails to my audio club members and we all said my God there are deaf people in the audio world, that if you move VTA .020 or even less and you can not hear that or VTF by .025 of a gram WOW. It would sure be fun to show you just how important VTA / VTF is with records.
Hey if you can not hear then you should not be writing on the internet about things you can not hear. It is simple keep your deaf ears off the web, everyone is laughing...
Thank You,
Brian - E-mail: brian (at) expressimoaudio.com

GH
I'm sure all your friends are feeling very smug - though none is prepared to undertake the experiment needed to back up such claims - nor have you put up any justification for your position beyond “if you can't hear it you are deaf”. As I've said many times before - the fact that I can't hear it means nothing, and that no-one would be happier if some evidence could be provided, but the fact that you - especially as a manufacturer making such claims - are unprepared to back up the talk is rather sad.
Hi-Fi is a pastime, a hobby, or even a scientific and engineering wonder - it is not a place for religious fanatics or con men.
Cheers,
Geoff Husband

LC
Dear Shaul,
the Ortofon Quintet Blue has been favourably reviewed by Todd Bromgard here on TNT-Audio. It is a mid-class MC cart which is, in my opinion, too expensive for your turntable. I'd rather choose a better Rega cart, such as the Bias 2 or the Elys 2. These are much better performers than your current Rega Carbon cart, and both cost much less than the Ortofon Quintet Blue. Moreover, they are optimal partners for your Rega tonearm. That's a plus you should take into serious account.
Finally, there's no need to choose a MC cart to get better sound quality, as there are truly excellent MM cartridges that can sound as good as any similarly priced MC cart.
Hope this helped somehow,
Lucio Cadeddu

Miniwatt N3
Dear Nick,
Since you were so kind to give me your opinions, I definitely want to give you an up-date about my office set-up.
I was not in a hurry, so I did not buy anything until I had the chance to go to HK and listen to different systems/combinations in a shop. To make the story short, I ended up to get a Trends stack made by a PA-10.1D GE tube preamplifier and a TA-10.2 SE (* used as a power amp) to drive the John Blue JB3 loudspeakers.
Maybe the TA-10 is not powerful enough to get the best from the JB3, but my listening are almost always at low volume, so I do not even go close to the clipping area of the TA-10. Being the low frequencies of the JB3 “warm and bouncy”, as per Geoff Husband's review, the listening at low-medium volume is really very much enjoyable.
I really love the synergy amongst those components. Last, but not least, if time to time I want to crank-up the volume, I just connect the Sennheiser HD25 Aluminium that I use during my commuting to the PA-10 and let's party. And again, for my ears and at the price point, that's another fabulous match.
I have to say that David Ho from Trends Audio made a special promotion which included also the loudspeakers, but those did not satisfy me as much as the JB3 in the office application. Being resident in China, for me the whole package was relatively inexpensive as there were no importation duties, no mark-ups made by the distribution chain and minimized logistic costs.
So the service from JohnBlue was fenomenal as well. With both companies everything went super smoothly and I am 100% satisfied of their service.
(*) Note on the TA-10.2 – I bought the integrated amplifier, instead of the power amplifier version, for flexibility reasons.
Since the potentiometer can be bypassed internally, in case in the future I want to use the TA-10.2 as an integrated amplifier unit, it will take few minutes to convert it back to the original configuration.
Thank you very much to the whole TNT-Audio team for your reviews and precious suggestions.
All the best.
Fabrizio - E-mail: fab_ferrari (at) hotmail.it

NW
Hi Fabrizio,
Thank you for the feedback. Although I haven't heard the JB3 speakers, I am not surprised that you liked the Trends system, that is an excellent example of how to achieve high-end audio on a lower budget. It was also good to hear that Trends are still doing business, and continuing to offer good service.
Regards,
Nick Whetstone

On Thor Audio TA-1000 tube preamplifier
Hi TNT,
This is a mail from Norway regarding a pre-amplifier: Thor Audio TA-1000 mk II. First of all, I love the quality of info from your website and know you are busy and have to sort out what mail to answer. I do wonder if the pre-amplifier mentioned above is still a good buy...comparing to what's available to day. Lucio Cadeddu had a rewiew of this amp. I am slowly building up a hifi system that I can enjoy some day in the future. I am impressed by the capacity Lucio Cadeddu have as an individual and would be even more impressed if he or someone choose to comment and reply to this mail :)
My system in the build:

I have the feel that this particular pre-amp might have something I appreciate in hifi, both a fast lively sound and at the same time a feel of 3D...

Dear Lucio,
I am extremely happy to receive info about my inquiry re: TA-1000. In case you know about info regarding what a "real" mkII" should look like...serial nr. etc...feel free to reply to me. A version of this amp is available for me to the price of Euro 2000,- There is a black and yellow sticker on the backside of the pre-amplifier and at the low the end of this sticker the serial number shows "1000" on a white background. On Audiogon, 10-16-2006 5:53pm I found this info from Paul Marks at Thor Audio:
"If a seller claims that his component is the FULL MKII version, then it MUST have a yellow and black sticker on the back of it with a serial number of OVER 1000. If it does not, it is not the full version". - Note that the number has to be "OVER" 1000...meaning 1000 is not a mkII. Yet, in another note at Audiogon from the same source...it is mentioned that "any amplifier with serial number below 1000, is not a mkII."...which implies that serial number 1000, could be a mkII. For me, the Devil is in the detail and I am not able to come up to an conclusion whether this available amp is an mkII or not :)
Lars - E-mail: flandern (at) mail.com

LC
Dear Lars,
unfortunately only the Company or the designer himself can answer to your question regarding the differences between mkI and mkII versions. I can only confirm what I wrote at that time: the TA-1000 is an excellent piece of gear and if tubes are in good working order it will give you years of listening pleasure. Choose a good partner as power amplifier and I'm sure your system will be extremely good sounding.
Hope this helped somehow,
Lucio Cadeddu

Total disappoinment!
Here you had a tube PRE-AMP along with a class D amp, yet you never bothered to use the pre-amp out! That is EXACTLY what I was interested in the A1 for. I like class D amps, but they can sound lean and clinical, especially with digital sources, but putting a tube pre-amp in front of one can make one sound more analogue, as in the Rogue Audio Sphinx. so the amp is weak. I never had any interest in the unit as an amp, and cheap tube preamps are impossible to come by.
You also didn't bother to tube roll with it. You complained about their lack of info, fairly enough, but I'm complaining about YOUR lack of trying to get the best out of the amp. You didn't even bother to talk about the headphone out either.
ALL your review did was to complain about the amp section without bothering to review the pre-amp and headphone amp. Did you hate the product that much that you couldn't be bothered to give those of us who can't afford $10k systems a little more to go by?
Unknown - E-mail address removed

LC
Dear audiophile,
I'm sorry you didn't like my review of the Maverick Tubemagic A1 amplifier. I didn't bother using it as a preamp because this amp is meant to be used as an integrated unit. If one wants a tube preamp, why waste money on a useless power amp section? It's plenty of inexpensive tube preamplifiers out there (new or second hand), just have a look at Ebay! There are even DIY pre-assembled boards for less than 20$ and finished products (FX-Audio, for example) for as low as 50-60$. Secondly, I hate testing tubes and trying different brands of tubes on entry-level amps/preamps, since good tubes can be as expensive as the whole amplifier!
I have no experience with headphones and headphones amps, so I didn't even dare to review its headphone output. Generally I wasn't particularly impressed by the sound of this product, sorry!
Hope this helped somehow,
Lucio Cadeddu

LC
Dear Shaul,
I'm glad you enjoyed my review of the Ortofon MC1 Turbo cart. The MC3 Turbo is nothing else than a standard MC1 with a better stylus. The MC1 uses an elliptical diamond while the MC3 uses a more sophisticated “nude fine line” profiled diamond. Just have a look at the official specs chart below and you'll see the two carts are mechanically and electrically identical, the only difference being the stylus profile. This means that the MC3 sounds like the MC1, just a little bit better, thanks to its improved groove contact, trackability, channel separation etc. I expect the MC3 to have firmer bass, better 3D imaging and lower distortion levels.
Hope this helped somehow,
Lucio Cadeddu 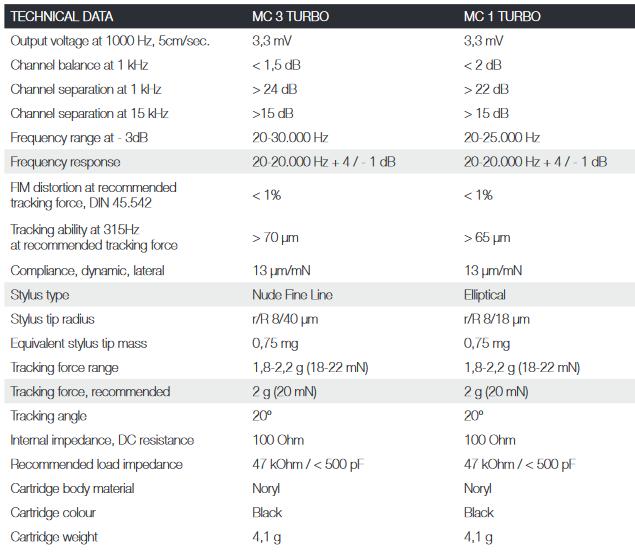